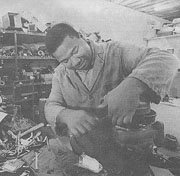 Tony got his start in business because of a lemon. His car broke down so often that he became expert at fixing it, especially his engine’s turbocharger. After working in Los Angeles County’s heavy-equipment maintenance department, he eventually decided to open his own shop selling rebuilt turbochargers. These days, national and international mail-order customers make up about 80% of Tony’s business, much of it generated by his Web site (https://www.a1turbo.net). Tony, who won a “rising star” award from Black Enterprise magazine earlier this year, was interviewed by freelance writer Karen E. Klein.

When I decided to start my own business, I approached several turbocharger manufacturers, asking if I could be an authorized dealer. Most shut the door on me, I felt, because I was a minority. One wanted a franchise buy-in fee of $200,000, which I did not have.

But I didn’t get mad, I just got smart. I started buying aftermarket parts that had been refurbished to my specifications and decided to open independently, with help from my parents.

That decision worked in my favor because my business would have been limited by an agreement with a manufacturer. For the first several months, I did all the work — took the orders, picked up the product, rebuilt the parts and delivered them. Now two of my brothers and my wife work with me.

About six months after I opened the business, I began advertising in national car magazines. I saw ads from companies selling parts, so I called them and asked how the advertisements had worked for them. They were honest with me and I decided to take a chance on a small ad because I knew I should sell on a national level.

Over the years, I picked up a lot of contracts and customers from this kind of advertising. I knew I could send the rebuilt turbos next door or across the world. Customers happy with my work referred me to their friends. We sell to auto parts businesses, car dealerships and individuals.

A few years ago, I began advertising in international newspapers, and now I have clients in Germany, Japan, Canada and Mexico. I work for a lot of servicemen stationed overseas.

I believe you have to advertise continuously to keep up the mail-order side of the business. It is important, because if nothing is happening in L.A. at times, I still have customers in lots of other cities I can rely on.

In the last two years, we have been doing a lot of work that we get from the Internet. My father, Roosevelt Roby, has his own Web server and he helped me design and set up my site. Car buffs from around the world find us and they can place their orders online. I keep up with current prices, and I will cut a few dollars off my price to get a new customer.

We use local and international carriers and pass the shipping charges on to our customers. Because we do so much work through the mails, we keep lots of parts in stock and rebuilt pieces of equipment on hand so we can achieve a one-to-three-day turnaround time.

Language problems have occurred, but usually they can be overcome with the help of overseas operators who act as translators. It seems that almost everyone can type out enough word in English to send an e-mail.

I have competitors, but they don’t scare me. By advertising, setting up our Web site and keeping a tight focus on our specialty, we have done very well.